To marginalize, per the Merriam-Webster Dictionary, is to relegate to an unimportant or powerless position within a society or group. In America, gender pay gaps and the low representation of women in many industries—including STEM fields and entertainment—keep the female voice hushed.

With America facing a change in administration, women are finding ways to ensure that they are heard. On Friday, January 20 in Washington D.C., President-elect Donald Trump will be sworn in as the nation’s 45th president. On his first day in office, there’s a plan to bring more than a million women and feminists to the nation’s capital. The idea for this march according to organizers, is to “join in diversity to show our presence in numbers too great to ignore…[to] send a bold message to our new administration on their first day in office, and to the world that women’s rights are human rights. We stand together, recognizing that defending the most marginalized among us is defending all of us.”

Initially planned as a meeting of friends to express their discontent with the election outcome, interest in the event made it necessary to establish state-sized groups.  The march starts at 10 a.m. ET, beginning at the intersection of Independence Ave. and Third Street S.W. For those who want to participate but can’t make it to DC, Sister Marches are planned in other cities. As of Monday, nearly 700,000 people have expressed interest in 370 satellite marches around the world.

Why you should march:

An inclusive march recognizing the strength of diverse communities is one women of color should join. Rutgers columnist Yvanna Saint-Fort wrote, “the black woman stands at the precipice of marginalization. Living in a white-dominated patriarchal society, she is seen as the antithesis of importance.” The perception that the woman of color is less significant than any other member of the human race must be obliterated from the psyche.

The Joint Economic Committee reports nearly three-quarters of all prime-age women are in the workforce. More than half of married women work outside the home and almost 40% of them are the primary wage earner. More than 65% of mothers with children under the age of 18 are in the labor force. The U.S. economy would be 5% larger in 2030 if the gap between men’s and women’s labor force participation were cut in half.

Establishing equality does more than anchor the nation’s values. An agenda of equality addresses poverty because women make up the majority of the world’s poor population. A cry for equality is a demand for a stronger economy and the strengthening of families. Participation in moments like The Women’s March on Washington is an exclamation for the health of our nation. In a time of change and a time of growth, every opportunity must be taken to speak clearly and pointedly, “women are present, we are valuable, and we will not be silenced.” 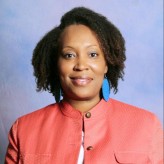 Dr. Joynicole Martinez is CEO of the Alchemist Agency, a management consulting firm serving leading health care, housing, educational, and not for profit corporations. As a community advancement and public health expert, Joynicole has developed initiatives that reach across disciplines to strengthen health and wellness and address the social determinants of health, equity and human rights. Dr. Martinez earned a BA in Political Science and a MBA in Marketing from the College of Charleston, a MBA in International Business from the University of Phoenix, a DSc. In Clinical Counseling and a DHSc. in Public Health and Health Science with a concentration in Leadership and Organizational Behavior from A.T. Still University. She is also a Certified Six Sigma Green Belt (CSSGB). She sits on the Board of Directors for the Wisdom To BELIEVE Foundation, and is the US Chair for Housing and Development for the ALL Ladies League (India).